So, I’m not sure how many are following the events of the Kill Sessions, but if there are any interested in the story, thank you for following. For those interested […]

The Kill Sessions are a series of short stories written by Gabriel Francis and Grant Smuts, detailing the lives and struggles of assassins in the fantasy city of Dorinstadt, which is set in an alternate world, filled with magic and monsters. Reincarnation is a central tenet within the world, with much made of the cycle of life, death and rebirth – souls being born again into new bodies, though bereft of memories, may come to recall the skills they once had.

The assassins are key figures in a millenia-long conflict between the Life and Death, who are actual anthropomorphic personifications of the concepts. They come close to being physical gods within the setting, able to bend time and space at will, though the balance of their power has shifted with the birth of magic. Since magic shifted some power towards humans, the claiming of souls that have passed beyond death into the cycle has become the new way for these two to become stronger.

They each employ their agents in an attempt to stop the other from growing too powerful, and it often turns out that they stalemate each other, with neither achieving their true goals in the face of their conflict. Despite the assassins firmly believing in Death’s cause, they have rarely seen her.

The volumes are written in POV format, with each assassin getting the limelight in their own episode.

A Glossary of the Important Terms in the Kill Sessions:

Balance:
The true nature of the universe – Life and Death in accord, walking a fine edge. Each must be equal, lest the other overwhelm all. There are many Lifes and many Deaths, spread across the universe, each in adherence to the balance which in turn is presided over by the Life of All and the Death of All. The true nature of the balance is difficult to ascertain, as is the ends it is meant to accomplish. It is considered beyond the scope of humanity to discern, and that it is the province of those born with the power to wield them.

The Balance-Preserver, Death:
The grim reaper, the chaser of souls, the hunter of men. Death is the aspect of mortality, made manifest. Recognizing that the strategies of her erstwhile partner Life has changed, Death has opted to put a stop to Life’s attempts to seize more power for itself. Their battle has been waged for over a thousand years, but it seems as though Life is slowly growing more powerful than Death. But Death will not yield until Life once more adheres to the balance – one way or another

The Challenger to the Balance, Life:

The essence of birth and being, Life is the counterpart to death, the summer and spring to Death’s autumn and winter. After the unleashing of magic within the Rift, Life feared that Death and Life might be undermined by sorceries. Seeking to undo the remaking of the Balance, Life began to bloat itself on souls that passed beyond Death’s veil, denying them reincarnation. Life’s agents continually seek the means to further their lord’s cause, birthing cults which culminate in religions.

Dorinstadt, the City in the Rift:
Dorinstadt is a place of strange silences and false normalcy – a city that acts at times as a trading post and as the hub of civilization.  The city is neatly divided into rich and poor areas, each under the control of certain guilds and factions, and all of them answering to the secret leaders of the city – merchant princes, and nobility. It is in Dorinstadt where both Life and Death has settled and begun their conflict anew. Much of Dorinstadt’s magical resonance also lies below the city – a place of twisting catacombs and an older, buried city. The flow of time is distorted in Dorinstadt – men and women do not age entirely as they should, and strange portals open through which the past and the future might be accessed.

The Giants:
Beings older than both Life and Death, they serve as the precursors of all life within the Rift, and are thought to have brought it forth by unknown means, thus inviting a new Life and a new Death to dwell among them. The Giants dwell in hidden places within Dorinstadt, and the assassins believe they regulate the city and the events beyond it by means of human agents.

Magic takes on many forms, but each of them adhere to one of the four schools:
Rift, Rune, Light and Shadow.

Hurtling through the void is a vast elder beast – the remains of a battle that happened untold aeons before. Low moans and groans accompany it in its traversal of the cosmos, pain wracking its all-but shattered body. A mighty sword nearly laid it low, in ages past, and it is only now beginning to heal. Within one of these wounds a world has taken form, a place of magic and dreams manifest. The Rift is the wound – a place of a life and death as the healing of the elder beast begins. The Rift is where the ocean lies, and within the ocean, continents, and within the continents, nations, and within one nation, a city, and that city is Dorinstadt.

The Cast:
And of course, we have our main characters. Each of them has a chance to shine in their own POV chapter each month, but in case you’re all having a hard time remembering them, I’ll introduce them:

Tolin: The closest thing the nine assassins have to a leader – he is the oldest and the most level-headed. A master Runic magic, Tolin leads by skill and arcane knowledge. Despite his dark work, he is often seen with a smile on his face, and is prone to being the butt of jokes. This aside, however, he is prodigiously skilled, and is the one responsible for allowing magic’s use in the world, having defeated the giant who guarded it. 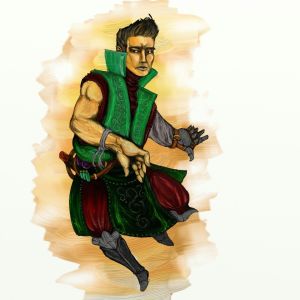 Tolin as a young man.

Lupin: A relatively new assassin, skilled with the blade, and with the potential to learn all forms of magic. He is relatively innocent compared to the other assassins, though his bloodthirst awakens when conflict arises. He is nicknamed the Wolf for his ferocity in battle.

Isaac: A quiet, soft-spoken man. Deeply philosophical, he often ponders the nature of the conflict. Isaac has the ability to walk into the dreams of his targets and kill them there. His abilities are, so far, unique, which has caused the other assassins to look at him with a small amount of awe and fear. He is skilled with the long-sword.

Sarah: One of twin assassins, gifted with Rift magic. Sarah is beautiful and graceful, and has a somewhat aloof and taciturn nature. In battle she utilizes psionic blasts in tandem with her graceful swordplay.

Twitch: Sarah’s twin sister, and equally adept with Rift Magic. Twitch uses her abilities to utilize a limited form of teleportation. She is far more relaxed and friendly than her sister, and far more open to different points of view.

Lace: An assassin-in-training, the orphan Lace had the dubious privilege of living with the guild of assassins without being a member for several years. In that time, she grew close to Isaac, who serves as something as a mentor to her. Impulsive and hotheaded, her sense of right and wrong sometimes gets her into trouble. She utilizes an interesting combination of Light and Shadow Magic.

Sevra: An assassin, hidden in mystery and secret, currently operating quietly in the shadows. She is rumored to possess a power and a knowledge greater than any of the others, though very little is currently known about her.

Zeal: An assassin with no special attributes beyond sublime skill and a capacity for mayhem. Zeal is cold and aloof. Described as unemotional at best, his outbursts of sudden rage and violence are frightening to behold. Zeal is trained to the pinnacle of strength and speed, and his skill with weapons is such that he ranks above many of the powerful magic-users of the guild. He is a survivor of the previous generation of assassins, along with Tolin, though it seems that he was much closer to those assassins than those of the present day era. It is hinted that he carries the souls of his former comrades within him – if that’s true, then seven souls are reincarnated within his person – a thing that has never happened before. Zeal favors twin daggers for lightning-quick assaults, though he also uses throwing knives, hand-crossbows and a short-sword to supplement his skills.

The assassins differ in their perspectives, and some of them flat out dislike each other… but all of them serve Death in their own way, and all of them preserve the Balance, even if they don’t fully understand it. They know the alternative – a cold world beneath a dictating godhead – runs counter to the freedom and the truth they believe belongs to all living things in the world.

I love long walks on the beach, candle-lit dinners. And the occasional blood spatter.